Edward Lee
From Buttermilk to Bourbon
Explore the class
Fried chicken. These are two dangerous words to hear when you’re hungry. There’s something about the taste and texture combining fried crust and juicy meat underneath that makes you want to drop everything you’re doing and primitively devour this Southern delicacy at any cost. Maybe it’s because, as chef Edward Lee puts it, “there is no bad fried chicken; there are only levels of good.” And that is very good news for you, as a home cook, because this delicious chicken recipe is “easy to make” and “hard to mess up,” as Edward puts it.
Chef Edward Lee
From Buttermilk to Bourbon
Explore the class While fried chicken is most closely associated with the American South, it is a food enjoyed across the world. In Japan, it’s a Christmas tradition for people to eat American-style fried chicken. KFC is China’s most popular fast food chain; it’s twice as popular there as McDonalds, while many say the best Kentucky Fried Chicken in the world is in Jamaica. So many countries have their own variations with all kinds of cool ways to coat, marinate, season, and fry it. Korean recipes coat it in a chili paste called gochujang sauce. Guatemalans marinate it in spices and citrus juices. And in the Southern United States, it is customary for fried chicken to be brined in buttermilk and coated in batter or flour before placing in vegetable oil for frying until it’s golden brown and crispy.

How Do You Make Easy Fried Chicken? To Soak or Not to Soak In Buttermilk

You might be wondering why it’s important to soak chicken in buttermilk or why is buttermilk used as a brine? The answer is simple: buttermilk contains an acidity which helps break down and tenderize the fried chicken. Plus it adds flavor. To make his Buttermilk Fried Chicken, Edward dunks his chicken pieces into a bowl filled with buttermilk and lets the pieces sit. You can let the chicken sit in the bowl of buttermilk for an hour or overnight, although the longer it stays immersed in the buttermilk the more tender the chicken will be.   Buttermilk marinade for chicken is a wonderful soaking and tenderizing agent. The acidity in the milk will break down and destabilize the chicken’s protein structure, resulting in a much more tender piece of meat.

What is a Good Buttermilk Substitute for Fried Chicken?

The purpose of marinating your chicken in buttermilk before frying it is so that the fried chicken will wind up crunchy on the outside and juicy on the inside. But there are alternatives to buttermilk if you don’t have it handy or prefer not to use buttermilk. Here are some of the most popular buttermilk substitutes when making fried chicken:

Sour Cream and Water: Sour cream is great as a buttermilk substitute because it’s tangy, but it’s also thicker than buttermilk. As a result, add water to the sour cream to thin out the sour cream so to achieve a similar consistency as buttermilk.

Milk and Vinegar: Milk combined with vinegar also works as a buttermilk replacement. Distilled white vinegar is best because of its neutral flavor. You can also mix milk with cream of tartar (to replace buttermilk) due to cream of tartar’s acidity. Unlike the fried chicken you eat at most restaurants, which is deep-fried, in his YesChef lesson Edward makes a shallow-fry fried chicken, which is probably the way fried chicken was made many years ago. In a bowl, Edward uses a spoon to blend all-purpose flour with some salt and pepper and a little smoked paprika. Next, he drenches his chicken in the batter before laying the pieces of chicken over some egg cartons. (If the surface is flat, the chicken will stick to it, Edward says.)   Edward fills a pan with corn oil (Because you’ll be using lots of oil, Edward says, it’s better to use an inexpensive oil) which he heats to 350 degrees Fahrenheit. He gently places the chicken pieces into the corn oil for 12 to 16 minutes, depending on the size of the chicken. It’s okay if part of the chicken is above the oil surface when shallow frying; just be sure to regularly turn the chicken over in the cooking oil.  Edward places the fried chicken, which should now boast a beautiful golden crust, on paper towels to eliminate excess oil before transferring the crispy fried chicken to a platter.

How Long Does It Take to Fry Chicken?

Our best estimate is that it takes fried chicken 12-16 minutes to cook in a cast iron skillet filled with a few inches of oil set to 350°F (180°C). That being said, the time depends on the size of the chicken and whether you prefer fried chicken breasts, wings, legs, or thighs. Edward recommends dark meat chicken for its higher fat content, always with the bone-in. More fat and a thick bone equals a more flavorful and juicier piece of chicken. 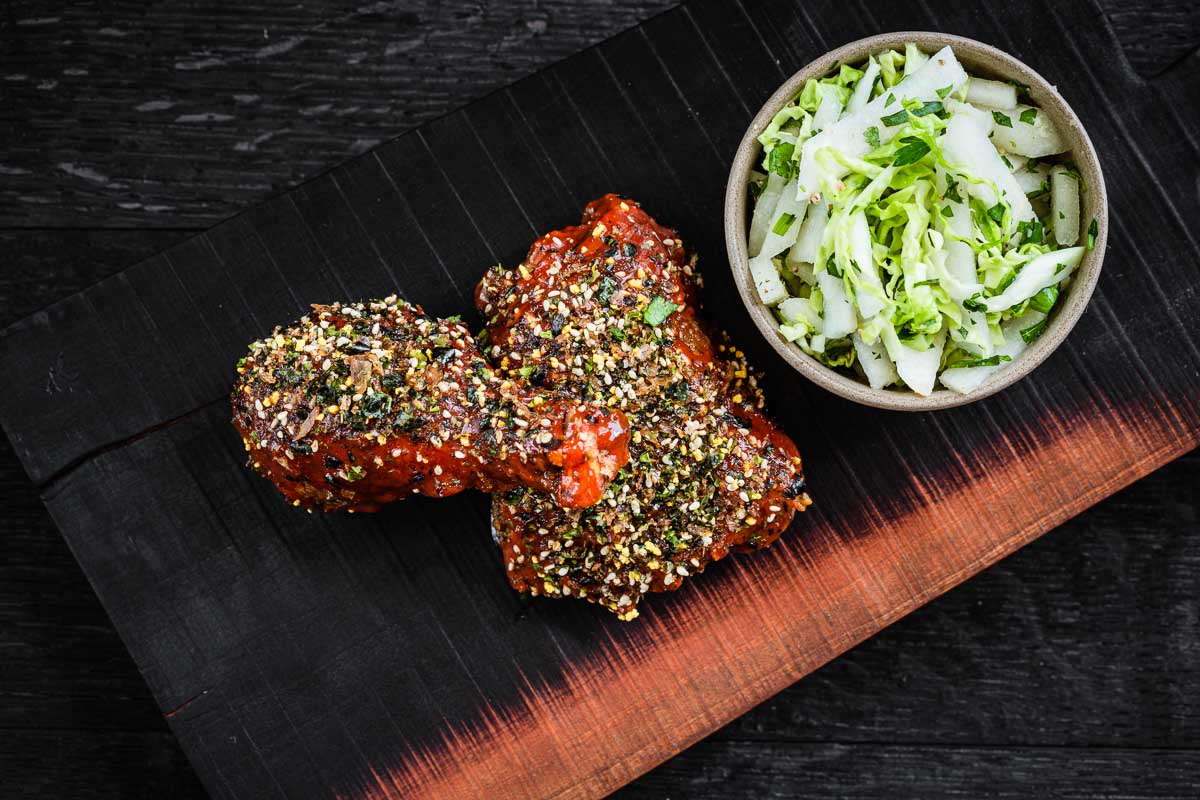 What To Serve with Fried Chicken?

As tasty as fried chicken is, it’s best with a great side dish or two. Some of the more traditional complimentary foods you can eat with a Southern fried chicken recipe are mashed potatoes, biscuits, mac and cheese, cornbread, and coleslaw, whose cool crispiness makes it a classic condiment to eat alongside your fried chicken.  Edward makes an Asian Pear and Cabbage Slaw to accompany his fried chicken. This coleslaw is perfect to pair with his buttermilk fried chicken because it is fresh, crunchy, bright, acidic, and herbal. Edward makes it by combining Asian pear slices, cabbage, cilantro, ginger, salt and pepper, a little sugar, and vinegar. He tosses all of these ingredients in the bowl with his hands. “Slaws,” he says, “are meant to be rough-housed a little bit.” Edward drizzles just enough Korean Gochujang sauce over his fried chicken to coat its layers, letting the sauce run over the side of the crispy fried chicken. He tops it off with furikake, a Japanese seaweed blend, along with dried Nori, sesame seeds, and bonito flakes on top for an additional layer of crunch.

Tips and Tricks for the Best Fried Chicken

To safely and efficiently make the best fried chicken recipe possible, here are some fried chicken tips and tricks that Edward recommends:

Egg Carton Trick: After dipping his chicken pieces in a batter of flour, salt and pepper, and smoked paprika, Edward lays them over an egg carton. Laying them on a flat surface, he says, could cause the chicken to stick to the surface.)

Safety First: When frying hot oil in a pan, Edward recommends having a lid handy in case the oil catches fire; covering the pan will stop any fire. Another important precaution when cooking fried chicken is to never drop the chicken into the oil; rather, make sure to softly and gently place your meat into the oil.

Cook Pieces Evenly: To ensure your fried chicken pieces are cooking evenly on all sides – and that it doesn’t stick to the bottom of the pan – turn it over consistently with tongs.

Use a Timer: And don’t forget about it: A good way to time everything perfectly and to make sure your fried chicken turns out just right, is to set a timer, since it’s difficult to know when the fried chicken is done simply by looking at it. (For a medium-sized piece of chicken, set your timer to 14 minutes.)

Add Sauce Late: The timing when adding sauce to your fried chicken is important. Because the perfect fried chicken is dry on the outside and moist on the inside, Edward explains, adding a wet sauce will inevitably take away some of its crunch. To maintain the crunch, Edward applies his Korean Gochujang sauce to the fried chicken crust immediately before serving it.

James Beard Award winning writer and best-selling cookbook author Edward Lee takes viewers from the farm to his restaurants and home in Louisville, Kentucky and teaches lessons on his beloved dishes including Fried Chicken with Gochujang Sauce, Oysters and Grits, Cabbage-Steamed Fish, and more.
Explore the class The Difference Between Stocks And Broths 7 tips on How to cook a perfect steak 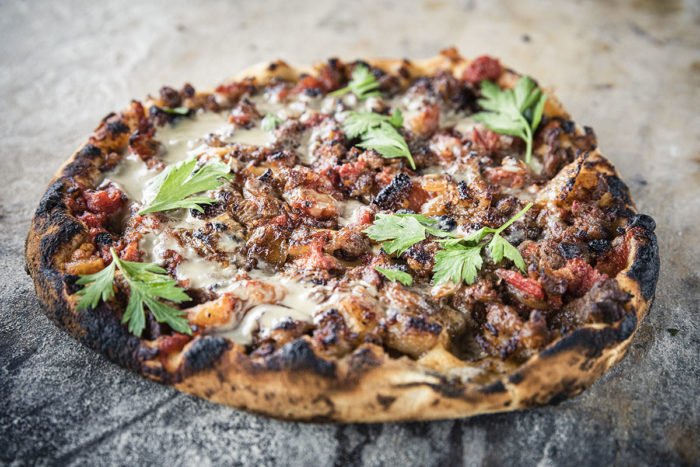 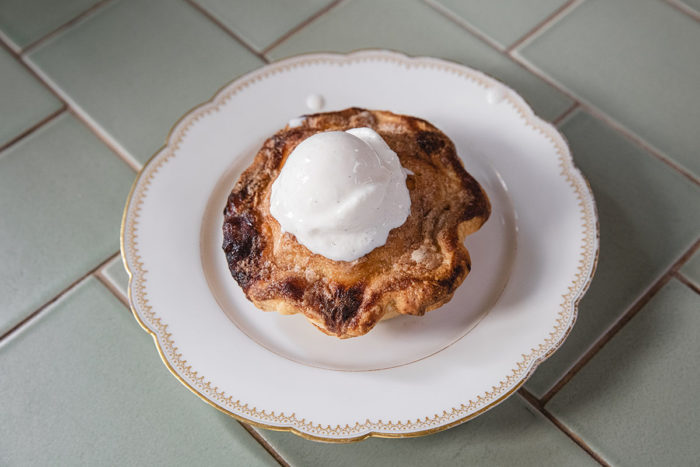 How to Make Caesar salad

What are Caperberries? How to Make Delicious Caperberry Relish