Erez Komarovsky
Teaches his Israeli Cuisine
Explore the class
Right now in restaurants and in kitchens throughout the world, eggplants of all shapes, sizes, and colors are getting roasted, sprinkled with salt and pepper and all sorts of seasonings, and transformed into delicious dishes. Small, sweet Italian eggplants are being incorporated into lasagna and eggplant parmesan; long thin Japanese eggplants are getting tossed into stir fries; small round Indian eggplants are starring in curries, stews, and dips; and white Middle Eastern eggplants are being made into baba ganoush. What this means for you, dear eater, is that the possibilities for your roasted eggplant recipes are endless. Learn all about roasting eggplant and watch “The Godfather of Modern Israeli Cuisine,” chef Erez Komarovsky, teach his recipe for a perfectly tender fire-roasted eggplant salad.
Erez Komarovsky
Teaches his Israeli Cuisine
Explore the class An eggplant is a great food with which to make salads, dips, and side dishes. This is because an eggplant is meaty and can easily enhance the flavor of the foods and ingredients with which it is paired. Eggplants don’t taste like much raw – an eggplant before roasting can be somewhat bitter – but after a rapid roast with spices and herbs in the oven, they can taste phenomenal. Even a simple upgrade with salt and pepper and olive oil can make an eggplant burst with flavor. Plus, you can roast eggplant, which is healthy and has no saturated fat, in about 30 minutes.

Pretty much any herbs and spices you have handy can work wonderfully when you roast eggplant. Your roasted eggplant recipe cannot go wrong with simple spices and herbs like salt and pepper, fresh lemon juice, minced garlic or garlic powder, fresh parsley, and extra-virgin olive oil. Erez gives his eggplant salad recipe an Israeli-Mediterranean spin with his inclusion of tahini, pomegranate syrup, and olive oil in addition to salt, lemon, and garlic. Green herbs are great for recipes like eggplant salad, which include cilantro, basil, mint, dill, thyme, and parsley. When done right, so many other recipes and dishes are excellent with eggplant, from omelets and pasta salads to soups. A delicious pasta recipe you can make with an eggplant, for example, is Pasta alla Norma, a traditional Italian pasta dish featuring eggplant cubes. Other Uses for Roasted Eggplant

Get rid of the skin and mash your eggplant to make roasted eggplant as a spread or as a dip. Spread your eggplant dip on toast with ricotta or with butter. Pair eggplant with other dairy products like yogurt (perhaps topped with pomegranates) or with parmesan. You might even find eggplant recipes that call for the inclusion of pickled chiles for heat or balsamic vinaigrette for tartness. And while eggplant goes well with many meats – whether you decide to grill it or roast it – eggplant is also perfect in a main course or side dish in your vegetarian, vegan, or gluten-free recipes.

How to Cook Roasted Eggplant

With just some brief Prep Time, here’s how to get your eggplant ready for cooking. You’ll just need a few kitchen tools and simple seasonings such as salt and pepper.

Cut Into Cubes, Slices, or Steaks

According to a common roasted eggplant recipe, the first step is to remove the eggplant’s stem with a knife. After that, slice the eggplant into cubes, rectangles, or steaks about an inch thick. You will want to preheat your oven to 425 degrees Fahrenheit, give or take 25 degrees.

Salt and Season the Eggplant

Before you roast your eggplant, most recipes suggest that you season it. If making cubed eggplant, you can place it in a colander and sprinkle it with salt. If you so desire, you can also add black pepper and olive oil in addition to the salt – and even seasonings like garlic powder and paprika for some extra flavor. (Some recipes state that adding flavor isn’t necessary because eggplants aren’t as bitter as they once were, but this isn’t a consensus view.)

Roast your cubed eggplant in the oven. Flip it over at some point to ensure that both sides become tender and golden brown. An eggplant roasted at a higher temperature will keep the eggplant interior nice and juicy; you don’t want the juice escaping the eggplant. Remove from the oven when the eggplant is caramelized on the outside and juicy on the inside.

The cook time when you roast slices of eggplant (or cubed eggplant) varies. If setting the oven to 400 degrees it may take closer to 45 minutes for your oven roasted eggplant to become perfectly tender; set your oven to 425 and your eggplant should become tender in about 30 minutes.

Another roasting variable is the size of the eggplant – skinnier Japanese eggplants take less time; large globe eggplants longer – and eggplants can take anywhere from 15 to 45 minutes to roast in the oven. Eggplant artisans generally will preheat the oven to 425 degrees Fahrenheit on average, with a temperature generally ranging from 400 to 450 degrees. Erez approaches cooking an eggplant a bit differently. For his eggplant salad, rather than dividing up his eggplant into pieces or cubes, he chars it whole above a burner and then – after removing most of the skin (while keeping some charred flecks on the eggplant for smoky flavor) – he puts the eggplant on a decorative platter and with a knife scores the eggplant to the stem. According to Erez’s roasted eggplant recipe, the eggplant remains whole and he doesn’t put the eggplant in the oven.

Tip: Because an eggplant before cooking can be bitter, simply rinsing your slices of eggplant with water and adding some salt can eliminate any bitterness in the taste. Because burned eggplant juices are naturally bitter, Erez says, you’ll want to put the eggplant into a colander and strain the liquid. Tip: When using a colander, put your eggplant cubes on paper towels and, to dry the eggplant cubes, dab them with additional paper towels. Trick: The key to roasting eggplant salad for your side dish, Erez says, is to make it smoky. To ensure your recipe has that smoky flavor, leave some of the burnt skin on the eggplant after you char it over an open fire. To make this recipe you’ll want to slice and open the eggplant – it’s very important that it is open, Erez emphasizes. Fun Fact: While eggplants are used like vegetables in the kitchen, they are technically fruits – berries, in fact – as they have seeds and grow from flowers. How to Pick an Eggplant for Roasting

The most common eggplants you’ll see in a supermarket in the United States are large eggplants with dark-purple skin called globe eggplants, or American eggplants. Globe eggplants can become very savory and flavorful when cooked and are excellent for cooking over an open flame. But any eggplants can taste terrific when cooked, from Japanese and Chinese eggplants with their thin skin and delicious creamy taste to the small, sweet (and equally delicious) “Fairy Tale” eggplant.    When selecting the eggplant you want to use for roasting, look for an eggplant with smooth, firm skin. Soft spots mean the vegetable – sorry, the fruit! – is starting to spoil. You’ll also want to choose an eggplant that feels heavy. An eggplant whose weight is too light should be avoided because it is likely dried out.    Additionally, avoid cooking eggplants with lots of seeds in them because they tend to be more bitter. How do you know by looking at an eggplant how seedy it is? One clue is its size. Smaller eggplants, which are younger, customarily have fewer seeds and are therefore less bitter than more mature eggplants, which are bigger and puffier. The sex of an eggplant – yes, eggplants can be male or female – also provides a clue. Male eggplants, which have fewer seeds and are therefore not as bitter, can be identified by round, shallow indentations at their bottom. Female eggplants, which have deeper dash-shaped dimples at their bottom, are bitter and thus to be avoided. And so, for a more meaty, less bitter-tasting eggplant, select fruits at your market that are male and on the smaller side.

Unless you load them with oil or with salt, eggplants are pretty healthy to roast. They originated in Asia and India and were brought to Europe during the early Middle Ages, but have been used in traditional medicine for millennia. But why are they healthy to cook?

For one thing, they are low in calories and fat (including both Monounsaturated fat and polyunsaturated fat) and have a decent amount of fiber and potassium. Also, eggplants contain healthy amounts of Vitamin C and Vitamin A, which are antioxidants. There is a good reason why eggplants are an important and healthy staple in many vegan and vegetarian diets.

(Note: When cooking eggplant, consider adding black pepper to your recipe; according to studies, black pepper is anti-inflammatory and is thought to contain antioxidant properties.)

Renowned chef, baker, and cookbook author celebrated as the “Godfather” of modern Israeli cuisine, Erez Komarovsky takes viewers on a  journey to discover the roots of his Middle Eastern cuisine. Starting from the bustling markets of Tel Aviv, Israel to his blissful home in the North Galilee, Erez teaches viewers how to bake his “flowering” Challah and Pita breads, plus his signature dishes including Lamb Kebabs, Hummus Mezze with Falafel, Harissa Chicken, Fish Crudo and more.
Explore the class 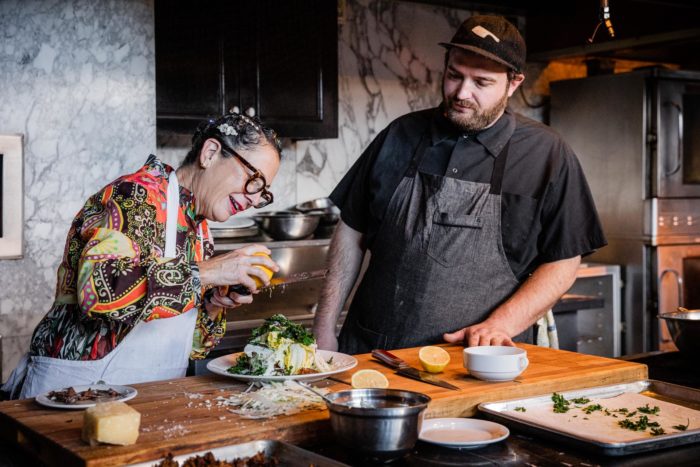 How to Make the Best Homemade Pasta

How To Make Kohlrabi Kimchi Recipe